You are here: Home / HOME / GARDENING / Can You Grow Corn from Popcorn kernels? SEE HERE!
Spread the love

Popcorn kernels can be planted in soils to grow corn cobs. The process of making the seeds doesn’t kill them, it just dries them out.

It is possible to grow the kernels into full corn plants. Personally, I have tried Orville Redenbacher, and some grocery store popcorn and it grew fine.

The only downside to this process is that the results are a bit unpredictable.

Can You Grow Corn from Popcorn kernels?

It is quite possible to grow plants from the kernels you get for making popcorn, but remember that the result will be unpredictable and not as good as sweet corn. Popcorn is super starchy and not sweet.

See also  Can You Paint A Silver Aluminum Greenhouse Green? FIND OUT!

How to Grow Corn from Popcorn Kernels

Here is a fast tutorial on growing and germinating the seed:

Note: To prevent squirrel/rodent attack on your corn, place soda bottles over the ears of corn with ventilation holes punches into it so that you their attack won’t bring mildew to the corn.

ALSO SEE: Why are My Arborvitae Dying?

Can You Plant Un-Popped Popcorn kernels?

Yes, unpopped popcorn kernels will grow if planted. For best results, get non-gmo’ed kernels from a co-op.

Just place the seeds on a damp paper towel. That will show whether or not you possess a viable seed. Depending on the seed type, it might grow to be tall or short, or big or small. That will determine if it can be cross-pollinated with other varieties too. You can buy non-hybrid seed popping corn in small quantities.

Can We Grow Popcorn Kernels with Other Corn Plants?

It is totally fine to grow a different variety of corn with popcorn kernels. They will grow fine with no problems at all. However, this is not recommended because cross-pollination might occur.

Will the Popcorn Grown from Kernels Taste the Same?

No, it definitely won’t. That is because cross-pollination will happen between parent plants, thus giving rise to the production of corns with different taste.

Is it Possible to Grow Corn from Commercial Popcorn?

Yes, it is possible to grow come from commercial popcorn. It won’t grow if the seed is dead though. The popcorn mainly bought from stores is basically for consumption only. Stores typically sell hybrid corn varieties. So, ensure you’re asking before buying.

See also  Goat In Labor Not Progressing? What to Do! 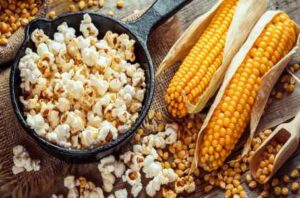 Can You Plant Popcorn Next to Sweet Corn?

Is Growing Popcorn in Containers Possible?

You can grow popcorn in containers with at least 12 inches diameter and 12 inches deep. Each container is able to hold 4 corn plants. Corn plants feed heavy, so you need to use compost or fertilizer in the soil before planting, and throughout the growing period.

Is Growing Popcorn for Profit Possible?

Yes, it is possible but ensure you aren’t getting the seeds that older growers don’t want and making use of the best practices should be your concern.