Are you searching for what causes corrosion on the outside of copper pipes on heating systems?For people living in cold regions, central heating is more of a necessity rather than a luxury. However, this prolonged exposure of copper pipes to water and air can cause them to go green.

Copper pipes are typically used for water heater pipes, which can oxidize in moist or damp conditions. You see the green color in the area where the pipe has had prolonged exposure to water or humid conditions, forming oxidation on the copper. It is a form of corrosion and can damage the pipe in extreme cases.

Another answer to what causes green corrosion on the copper pipe? is ‘Solder Flux”

Solder flux will cause copper pipes to turn green if not wiped off, on time.

The discoloration is however limited to areas bordering soldered joints ONLY, so it is almost certainly caused by the flux not being wiped off back when the connections were first soldered.

It should be limited to surface discoloration, so I’d use something abrasive like an emery cloth or steel wool to remove it.

Do the following to remove the green and clean your copper:

What Is The Green Stuff On Copper Called?

It’s the Patina, a chemical compound being a salt resulting from the reaction between copper, water, and atmospheric carbon dioxide.

What Does Green on Copper Pipes Mean?

A greenish-blue or green powdery substance on your pipe is typically caused by oxidation and generally occurs when the copper pipe is exposed to a combination of water and air or oxygen.

This oxidation can indicate a potential problem with your pipes, which would lead to a pipe failure if not thoroughly checked.

Why Do Copper Pipes Turn Green?

It is advised to use copper pipes in heating systems over other materials.

This is because copper is a good metal that conducts heat very well. Hot water is circulated through the copper pipes, and the metal absorbs the heat from the water and radiates it onto the air in the room, warming the floor or the air if the heating is underfloor piping.

The green color you see on the pipes is a form of oxidation that happens when the pip comes into contact with air and moisture. It can be likened to rust on steel, which forms under similar conditions on unprotected steel.

Yes, this is corrosive too, and if you fail to rectify the problem, it could turn into a much bigger issue – the pope corroding to the point that it fails.

A common location where green discoloration occurs most is where the pipe goes through a brick and mortar or concrete wall. Any moisture or dampness within the wall can result in the copper pipe oxidizing and turning green.

This may not indicate a problem with the pipe but could be a symptom of dampness in your wall that needs addressing. 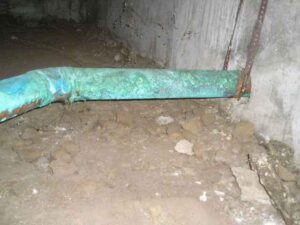 Should I Worry About Green Copper Pipes?

While it might be worrying when you discover a green coloration on your copper pipes, it doesn’t always have to be.

Remember, it is normal for metals to respond this way when exposed to water or air over time. So, reach out for your phone and contact a plumber ASAP.

The presence of greenish tints or green color on the exterior of your copper water pipes indicates the presence of water leaks and likely corrosion.

It might also mean that the pipe has come into touch with non-compatible metals, such as galvanized steel.

We recommend you cover the surface of the copper with salt and begin rubbing it briskly with a soft rag if it has obstinate copper oxidation due to exposure to air and water. Rub until the bluish-green discoloration disappears.

Do Green Copper Pipes Need to Be Replaced?

It depends. A pipe with significant corrosion will need to be replaced. However, a copper pipe with a minor one would need no replacement and will only need to be cleaned.

Now, despite its harmful appearance, the green oxide that appears on copper pipes exposed to air and moisture isn’t a harmful substance.

In fact, the substance that you see now is actually inert and not toxic in any way. It only a telltale sign that you have a pipe problem that needs your attention.

And yes, you should attend to it now because if the oxidized pipe is left, the leak could worsen, resulting in a burst pipe, or the corrosion of the pipe could weaken the pipe to the point that it bursts.

Either way, if you see green oxidization forming on your central heating pipes, it is unlikely to be an emergency but warrants investigation to locate the cause for the oxidation.

The time required for copper pipe to oxidize is fairly lengthy, so if you have not noticed a leak by any dripping or pooling water, the problem is unlikely to be severe. You probably have some time to sort the issue out, but you should not procrastinate.

Act now! Clean it off and save yourself plenty of headaches in the near future.

How to Remove Green Corrosion from Copper Pipes?

Copper oxidation can be gotten rid of in diverse ways.

For starters, a lightly acidic solution or a light solvent such as salt will generally solve the issue.

There are lots of recipes present on the internet on how to clean copper pipes. The strategy to prevent oxidation is regular cleaning.

Cleaning green oxidation from copper pipes does not need dangerous or expensive chemicals.

One effective way of cleaning the oxidation from the pipes is to use ingredients that you can already find in your kitchen cabinet.

The ingredients required are as follows:

WARNING: Acetone is a flammable substance so NEVER use it near any open flames. Avoid breathing the fumes in and always wear a respirator before using it.

Lastly, wear rubber gloves to protect the skin on your hands too.

How To Prevent Copper Pipe Corrosion

Alternatively, you can install a phosphate feeder before the copper piping. Phosphate will coat the piping and reduce or slow down the corrosion effects by coating the piping’s interior surfaces with phosphate and causing an insulation surface to be built up.

Green corrosion, also known as Patina is not harmful or dangerous. However, too much of it can corrode your copper.

So, it is always best to wipe it off before it becomes worse.

ALSO SEE: What is the Best Pool Table For Garage?

Green And White Stuff On Copper Pipes, What to do!

The green stuff you see is cupric chloride, a byproduct of corrosion of the valve body or possible copper leachate in their water.

Either way, it occurs in a common area where water leakage has occurred and is now suffering low pH.

The white stuff on the other hand usually appears like cotton candy is just efflorescence.

Dissolved minerals in your water precipitate out as the leak drips, dries, and deposits minuscule quantities of sodium, calcium, etc. on the valve body. You will see this white stuff where residual flux was left on a pipe and over time, condensation or outright leakage causes these buildups.

It’s always more pronounced at joints between dissimilar metals (due to galvanism).

Here is how to get rid of green and white stuff on copper pipes: 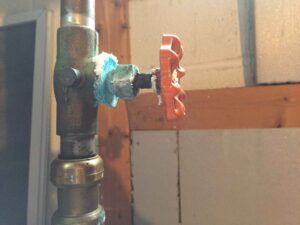 Green On Pipes Under Sink, What to do!

My guess is that some minor formation of moisture on the exterior surface of the copper pipe has caused the buildup of this “patina-type” crust. I would try and clean it with a mix of vinegar and baking soda.

The green discoloration on copper is not harmful to humans, in any way. It might just cost you some money in repair, at worst.

But, the presence of heavy oxidation can also be a sign of potential problems on the pipe or where the pipe is located.

Light oxidation typically is not a cause for concern, as it can be a reaction of the copper to the moisture in the air.

Heavy oxidation can also be a sign of a leak in the pipe or a join or damp conditions in a wall. In this case, it is crucial to establish the cause of the oxidation and then try a recipe to remove the oxidation and restore the color of the copper piping.