Although sometimes called topsoil fill dirt, topsoil is not actual dirt. Instead, it is a natural organic matter from grasses, weeds, leaves and tree bark that sustains plant growth while lawn soil is enriched with compost and organic matter to foster plant health and growth.

Dirt on the other hand is what you find when you excavate an attic or basement.

However, topsoil is not enriched or amended at all, which limits its use as a growing medium.

Topsoil is composed of clay, silt, sand, and other organic matter that is removed from the top 12” of the earth during development projects. It is useful for grading and is sometimes used for direct planting if it is of suitable quality.

Topsoil is stripped from the top layer of soil during construction projects.

Garden soil is topsoil enriched with organic and compost material that better meets the needs of a plant. The addition of compost plays a good role in the reduction of compaction and also provides nutrients that feed the plants for many years to come.

See also  Which is the Best Incubator For Ball Python Eggs & Reptiles? & WHY!

While it typically costs more, it oftentimes pays for itself due to improved plant health, better long-term results, and reduced irrigation requirements.

Gardening soil is a combination of a mixture of textures and soils that is designed to target a particular type of gardening project.

ALSO SEE: Will A Plant Regrow Its Roots if Damaged?

What is Potting Soil?

Potting soils are specifically mixed using special recipes and formulas. A lot of the potting soils out there are based on peat moss, with several other ingredients added to make them a great fit for certain usage.

For instance, seed starter mixes are typically really fine and fluffy so their fragile, fine roots can spread with ease. Perennial mixes have more back and larger pieces.

Some potting soils include perlite or vermiculite; flakes of fluffy featherweight rock that have been puffed up so it holds plenty of air.

Good potting soils are usually sterile, meaning they have no weed diseases or seeds in them.

Scientists see topsoil as the uppermost layer of soil. However, in the landscaping world, it refers to the earth that has undergone a screening process to remove debris and create a consistent texture.

Here is why soil is important to your garden.

What is Garden Soil?

Garden soil is the topsoil that has been improved to make plant growth a breeze. Improvements often include organic or compost matter, and some soils such as perennial potting mixes with added ingredients to encourage the growth of particular plant types.

Generic soils differ greatly in quality. When buying a bulk soil blend or blend one, double-check to ensure it has no fertilizers or chemicals. 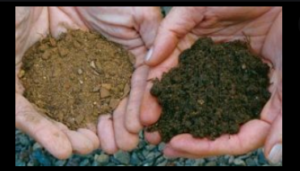 Deciding Between Topsoil And Garden Soil

Uses of Topsoil include:

See also  How Much Does the Firminator Cost + REVIEW (& Alternatives)

Uses of Garden Soil include:

Can I Use Topsoil in My Garden or Raised Bed?

Yes, you can. But we often advise you to test your existing soil to determine which nutrients your garden already has in abundance and which nutrients could use supplementing.

The difference between Scotts lawn soil and topsoil is that Scotts grows grass up to 50% thicker, which helps grass seedlings grow stronger and faster. Lastly, it encourages a greener lawn too.

Can You Use Garden Soil For Grass?

Yes, you can use garden soil for grass.

Topsoil vs Garden Soil for Grass

Yes, you can use either for your grass. But we often advise you test your existing soil to determine which nutrients your garden already has in abundance and which nutrients could use supplementing.

Can I use garden soil for Lawn?

You can use additional garden soil in some places in your lawn if you’re looking to extend your garden or create raised beds.

For maximum results, you should fertilize your soil after adding the new soil.

The best topsoil for vegetable gardens is the soil mix that includes compost, peat moss, and/or sand, vermiculite or perlite.

What is topsoil made of?

Humus is rich, high decomposed organic matter that is largely made from dead plants, crunched-up leaves, dead twigs and insects.

The topsoil layer is a mixture of sand, silt, clay and broken-down organic matter, called humus.

Topsoil is the home of living things and the materials that they make or they change.

Should I use Topsoil or Compost For Raised Beds?

For diverse nutrients, use compost soil but for filler soil, you can use topsoil.

Mixing topsoil and Compost For Lawn

Although you can mix topsoil with compost for your lawn, ensure the topsoil does not contain residual chemicals and weed seeds from pesticides.

The correct blend of topsoil and compost will create a perfect environment for healthy sod, which is an excellent foundation for a new lawn.

What is subsoil made of?

The subsoil is made of broken-down organic matter but is generally made of weathered rocks and clay minerals.

It is just below the topsoil layer.

What is Topsoil Used For?

Topsoil is a great choice for filling up raised beds, filling in holes, repairing eroded spots.

What is Bagged Topsoil Made Of?

Bagged topsoil can be sand, loam or clay or any other soil types that are mixed with fertilizer and or compost so never make assumptions but instead read what is labelled as “topsoil” in the bag.

You should read the bag contents seed starting mix.

How to turn Topsoil into Garden Soil

The fastest way to treat garden soil is to buy it. You can place a 2-3 inch thick layer directly on top of existing soil before you commence planting.

Once done, allow nature to take its course, or you can simply till it on. On top of that, you can amend your topsoil further with a few inches of compost.