Hay belly in goats is more common in Boer and pygmy goats. Hay belly is a well-developed rumen that looks normal and well rounded.

What Is Hay Belly in Goats?

Hay belly is simply a big belly full of hay. The ribs are still easily felt, with no excess fat or accumulation at the neck or shoulder junction, or behind the elbow.

Some people often mistake it for bloat in goats many a time but it is not.

Symptoms of Hay Belly in Goats

If it isn’t hay belly or bloat, then your goat could be pregnant.

If you feel she has rumen issues, offer her baking soda mixed with warm water; she will take it on her own. My Nigerian goats look like they’ve got hay bellies when they’re pregnant.

See also  Can You Eat Cockerels? What Age? - MY EXPERIENCE!

I have found out that female does that have been bred in the past might have had babies push the rumen out more to the left and as they grow, then the right side expands to look like the left. At least it does with mine.

What Causes Hay Belly in Goats? 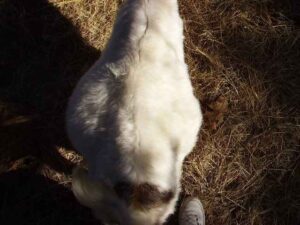 Is it fat, or Just Hay Bellies?

Fat belly means an excess fleshing over the ribs, spine, hips and rump, with accumulation between the neck and shoulder junction and behind the elbow.

Hay belly on the other hand is a big belly full of hay. The ribs are still easily felt, with no excess fat or accumulation at the neck or shoulder junction, or behind the elbow.

See also  Do Geese Keep Snakes Away in Australia, US, UK etc? - FIND OUT!

How to Get Rid of Hay Belly in Goats

Hay bellies are fine in dairy goats. In fact, you want to look forward to it if you farm goats for milk.

Hay bellies are natural and healthy but if you still don’t like it, do the following hay belly in goats treatment: