You are here: Home / HOME / GARDENING / SQUIRREL / Do Squirrels Menstruate/have Periods? FIND OUT!
Spread the love

Seen blood on feeding spots, and wondering – do squirrels have periods? Some squirrels have some vaginal bleeding during their heat cycles. One of mine, Ellie did but Bella never did.

Most squirrels go through a period known as “estrus”. Estrus refers to the reproductive cycle where animals such as cats and dogs experience when their bodies ovulate and they become highly receptive to mating.

See also  How to Treat Squirrel with Diarrhea + PICTURES!

Like humans, the ovulation period is when squirrels become pregnant. Some have it easy while others have it hard (bleeding).

squirrels go through a period called “estrus.” Estrus is the reproductive cycle that animals like dogs and cats experience when their bodies ovulate and they become highly receptive to mating. Like humans, this ovulation period is when squirrels become impregnated, but the similarities end there.

ALSO SEE: Where Do Squirrels Go When Their Tree Is Cut Down?

Not all squirrels discharge blood when in heat, but some do.

Mine has had some vaginal bleeding during her heat cycles. I believe it was twice over the past few years that I’ve seen blood.

Another thing to consider is acorns. Squirrels who eat acorns are very often suspected of urinary bleeding as acorns does tint the urine in squirrels.

See also  Where Do Squirrels Go When Their Tree Is Cut Down? 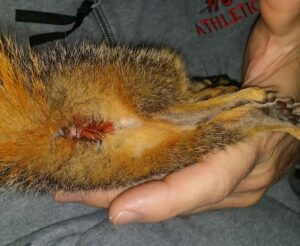 Can a UTI Cause the Bleeding?

Yes, a UTI can cause bleeding, usually when advanced.

Yes, they can. A favorable condition and lack of mates can cause this.

Do squirrels mate with siblings?

Normally, they won’t but nature does have a way of pulling the wild card on us.