You are here: Home / INFO / Dichlor Vs Trichlor vs Cal hypo vs Sodium Hypo – PRO’s & CON’s
Spread the love

They both can clean spa water, hot tubs and swimming pools.

PS: Dichlor for shocking is generally a no-no because it increases the Cyanuric Acid level.

What is the Difference Between Trichlor and Dichlor?

Dichlor Vs Trichlor for Pool or SPA

Note: This result only applies to Dichlor that is DIHYDRATE.

Part of the reason dichlor sucks is that you are buying water with it – Did you know? I guess not.

By buying the “dry form”, you are buying hydrated crystal with the Dichlor.

ANHYDROUS Dichlor on the other hand 1 pound equals 7.7 ppm FC and 7.0 ppm CYA. So, with anhydrous, you enjoy a bit more CYA per pound than you would with Trichlor. However, anhydrous Dichlor isn’t as readily available as its counterpart so you’d most likely be seeing dihydrate form more. 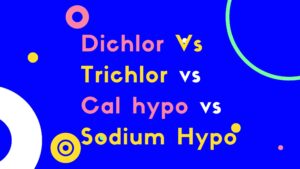 Trichlor Vs Dichlor Vs Cal Hypo

Dichlor increases your water CYA levels at an even quicker rate than Trichlor so I would discourage using it unless your aim is to increase the CYA levels.

Also, when calculating the actual amount of chlorine (FC) you get, Trichlor costs less than Dichlor, even accounting for the pH Up you need Trichlor.

As earlier stated, you cannot compare products based on weight only since they contain different levels of chlorine.

In most cases, chlorinating liquid or bleach are the cheapest way to go. Cal-Hypo is close (at times cheaper, depending on where you buy from), then Trichlor, then Dichlor and lastly Lithium Hypochlorite which is very expensive.

Remember the following chemical rules of fact that are independent of concentration or size of pool:

ALSO SEE: Can I Put A Hot Tub In My Garage?

This is a widely used option where available. But, its super high pH (13) OF LIQUID CHLORINE, a gallon of acid is typically needed for every 10 gallons of bleach you use.

Keep in mind that maintaining a consistent alkalinity and pH can become increasingly difficult.

This is yet another favorite for pool owners whose pool require high chlorine demand. Granular pH level is 11 (this is fair if you ask me) but its tablets levels are lower than 9.

It will either contribute to salt levels (sodium) or cyanuric acid, but it does boost calcium hardness levels in the pool, which is a bad thing for hard water areas.

In most cases, the tablet form come pre-mixed with additives to help clarify the water or reduce scale and stain formation.

These are rarely used by large commercial pool owners because they don’t just dissolve quick enough to meet the chlorine demand, but are more suitable to pools under 50,000 gallons.

Is Dichlor the Same as Shock?

Dichloroisocyanuric Acid is a type of chlorine shock. Dichlor has both cyanuric acid and chlorine and will, over time, raise your CYA levels.

What is Dichlor used for in Pools?

Dichlor is generally available in granular, providing owners an easy yet efficient way to chlorinate spas and pools.

It can also be used for extra water treatment functions such as controlling algae and oxidize contaminants and chloramines.

Yeah, it does but not as much as Dichlor. For every 1 pound of trichlor added (roughly two 3” tablets) to 10,000 gallons of water, the CYA increases 7 ppm.

Never mix them. If you do, they’ll react as they dissolve and you won’t like the result. Trichlor contains acid and calcium hypochlorite contain alkaline. These two just don’t belong together.

Yeah. It will attack algae and organic matter buildup.

Yeah, it will but you’ll hardly notice it.

Can you shock with Dichlor?

Dichlor for shocking is generally a no-no because it increases the Cyanuric Acid level.