You are here: Home / HOME / GARDENING / Can Roosters Lay Eggs? – The Mystery Behind it EXPLAINED!
Spread the love

Roosters can’t lay eggs because they are make chickens. Only female chickens, also known as hens are capable of laying fertile and infertile eggs.

A fertile egg is one that involves a male cock; fertilization occurs (a.k.a rooster mating with a pullet/hen while an infertile one does not require any form of mating at all.

A hen that does not mate with a rooster will lay infertile eggs, a.k.a table eggs! It is what is mostly sold in supermarkets!

It is possible if an hen become dominant and takes the roosters place and grew feathers like a rooster and possibly crow like a rooster…now that is possilbe it is rare but possible.

If your ‘rooster’ was a hen at one point and one of her ovaries was damaged and there was a spike in her testosterone and reverted to a rooster and now she is reverting to a hen again and laid an egg.

As earlier stated, Roosters are males and are not physically capable of laying eggs.

Hens are the egg layers because they are female.

During mating, the rooster lay on top of the hen and transfer its sperm into the hen, so that it will fertilize with the hens eggs and it will later develop in an egg.

Biologically speaking, roosters/cocks/cockerels are the males of chickens and as such their reproduce organs aren’t designed to produce egg but to release sperm that will fertilize instead.

See also  Can You Encourage a Hen to go Broody + HOW TO!

The hen lays eggs. But, some farm owners might claim that their dear rooster lay eggs. Happy to report that this claim is false. A rooster laying on top an egg or being close to one does not mean he laid it.

Also, the unusual egg size or color you find in your coop does not mean a cock laid it. Fir many reasons, egg laying hens can take a break from laying the usual size, type, or number of eggs. 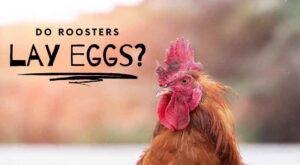 Do Chickens Need A Rooster To Lay Eggs?

No, they do not. However, if you plan to hatch your own chickens via an incubator or using a broody hen, you will need a male rooster to do its thang!

See also  What is the Best Greenhouse for Canadian Winter? SEE HERE!

Hens can lay eggs without a rooster. But, the eggs will be unfertilized and won’t hatch.

Benefits of a Rooster to the Flock

No! because there is no such thing as “female roosters”. A rooster is male chicken while an hen is a female chicken.

Does a Hen or Rooster sit on Eggs?

Roosters ccan sit on a clutch of eggs to warm them but it is a hen that sits to hatch them into chicks.

Do Roosters have balls?

Yes, they do. But, it is hardly visible and mostly internal.