You are here: Home / HOME / GARDENING / [Answered] Can Ducks See in The Dark? + Other FAQ’s
Spread the love

Ducks (except muscovy ducks) cannot see in the dark because they have terrible night vision. This is why it is important to provide a secure house for sleeping in every night. They are literally sitting ducks.

However, their eyesights are good during the day when there is light. This explains why they can fly farther during the week.

No, ducks can see color and are able to tell the which color. But, you and them don’t see color the same way though.

Ducks have shown to be able to see greens, reds, blue, and yellows more vibrantly and with more intensity than humans.

This is thanks to their retinas and an additional set of cones that lets them see ultraviolet radiation.

Research has shown that ducks can see 2-3 times farther than most humans can.

The placement of their eyes allows for a 360 vision and unlike human eyes, they’re able to adjust more than their lens. But, humans can only adjust the lens of their eyes.

This remarkable adaptation is the reason why a duck’s vision is very powerful and one of its strongest senses.

ALSO SEE: What Does A Rotten Egg Look Like When Candled?

Their adaptable retinas and cones gives them an exceptional light sensitivity and as a result bright colors (like pink) is something you don’t want to have on you when hunting ducks.

As a duck hunter, you should wear something that appear like a bush, tree, or brish. Buy a non pink camo.

Can Ducks See in The Dark?

Having a terrible night vision means ducks are unable to see in the night.

When it comes to daytime and light, ducks have very good daytime vision and can see predators and danger from a mile away.

But come night and they become just sitting ducks. This is why predators love to come at them at night.

And like I said earlier, they have cones in their eyes which humans do not have that allows them to see ultraviolet radiation.

To an extent, this allows them to detect danger and avoid predators even at night.

How Good is a Duck’s Eyesight?

Ducks have an excellent vision and can clearly see very far during the day.

Having a 360 vision means you can never sneak up on an adult duck. They will see you coming.

Do Ducks Sleep with One Eye Open?

Yes, ducks have been known to sleep with one eye open.

While sleeping with one eye open, they shut down half their brain while the other eye is open on the lookout for predators and danger.

Yes, they do. So, whether they are flying, sleeping or sitting, ducks engage their sense of vision.

Because their eyes are located on the sides of the heads, ducks have panoramic or 360 vision.

Yes ducks can see perfectly underwater and are able to change the shape of their eyes while underwater which helps them see clearly and feed better.

Ducks hunt by sight underwater and this is one of the ways they feed and look for food for their young ones.

And they can remain underwater for at least 60 seconds before coming up for air.

Are ducks scared of the dark?

Some ducks are scared of the dark and will shriek like crazy once you turn off the light.

To make them feel safer, keep a night light in your coops. 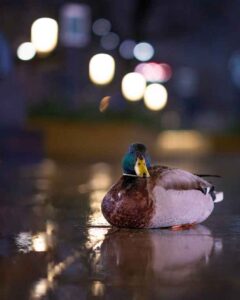 Can Ducks See In Color?

Yes, they can. They are able to see reds, greens, yellows, and blues more vibrantly.

Can Geese See In The Dark?

Geese can see in the dark and their vision is 12 times greater than ours.

See also  [How to Hatch] & Best Incubator for Emu Eggs

How Do Ducks See Humans?

The many color-receptive cones within the retina helps the ducks see humans.

Not all ducks like the dark. There have been events that show baby ducks shrieking once it is dark.

Can a Duck Kill You?

A duck is not physically able to kill you.

Ducks see orange and blaze orange and that is why most states do not require orange to be worn while waterfowl hunting.

Are Ducks Ok In The Dark?

Yes, they are as far as you provide them shelter at night (and warmth for the winter) and shade during the summer.

What do Ducks Do At Night?

Water fowls like ducks will loaf and roost at night.

Do Ducks Have Good Eyesight At Night?

No, they do not. They have excellent eye vision during the day though.

Do Ducks Have To Be Put Away At Night?

Yes, for their own safety. Ducks are very easy to prey on at night because of their bad night vision. This is why predators hunt them in the dark.

Can Ducks Go All Night Without Water?

Ducks like to sleep in their coop with their heads tucked under their wing on the water or an ice shelf at night.